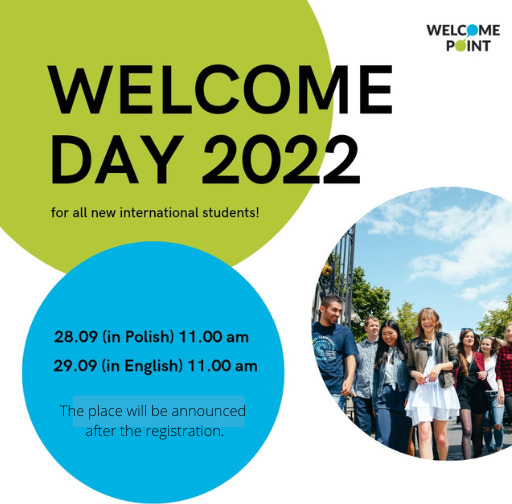 We invite all new international long-term students to a welcome meeting – specifically dedicated to providing you with all the information you might need as a new member of the UW community. You will learn about the structure and function of the University, the many opportunities it offers, the basic rules, as well as the University itself.

When?
You can participate in one of two stationary meetings:

Where?
Main Campus, Krakowskie Przedmieście 26/28
More information will be sent to you after registration.

We cordially invited you to the ceremonial inauguration of the academic year at the MSOŚ
and Sustainable Development, which will take place on October 3 (Monday) 2022 at 11:30 a.m. in Room 1012, floor 1, in the building of the Faculty of Geology, 93 Żwirki i Wigury Street.

This year, the event will feature a lecture by: Prof. Bogdan Jaroszewicz, Head of the Bialowieza Geobotanical Station of the UW Biology Department: Nature is not given a voice – we must advocate for her 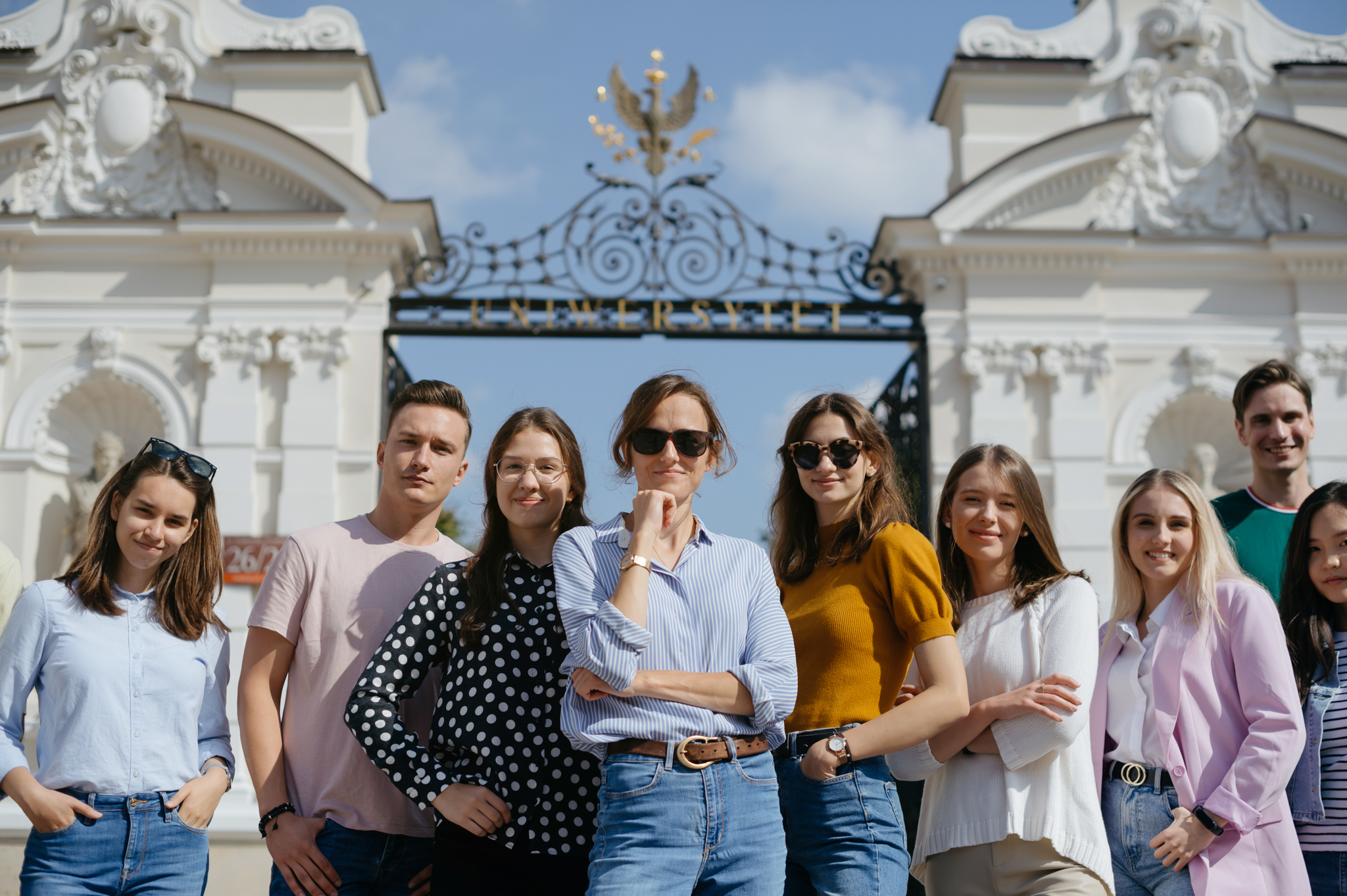 Welcome to the group of UCBS UW students!

All applicants who have been accepted to the university are encouraged to join the official University of Warsaw Students Facebook group – UW Students!

There you will find all the necessary information about studying at the University of Warsaw. Until the beginning of October, the group will feature posts discussing issues such as USOSweb, registering for classes, applying for a place in the student house, foreign languages, sports and P.E. classes, general university subjects, ID cards and many others important from the perspective of a first-year student. This is also the place where you can ask your fellow first-year students questions about the practical aspects of studying at UW. 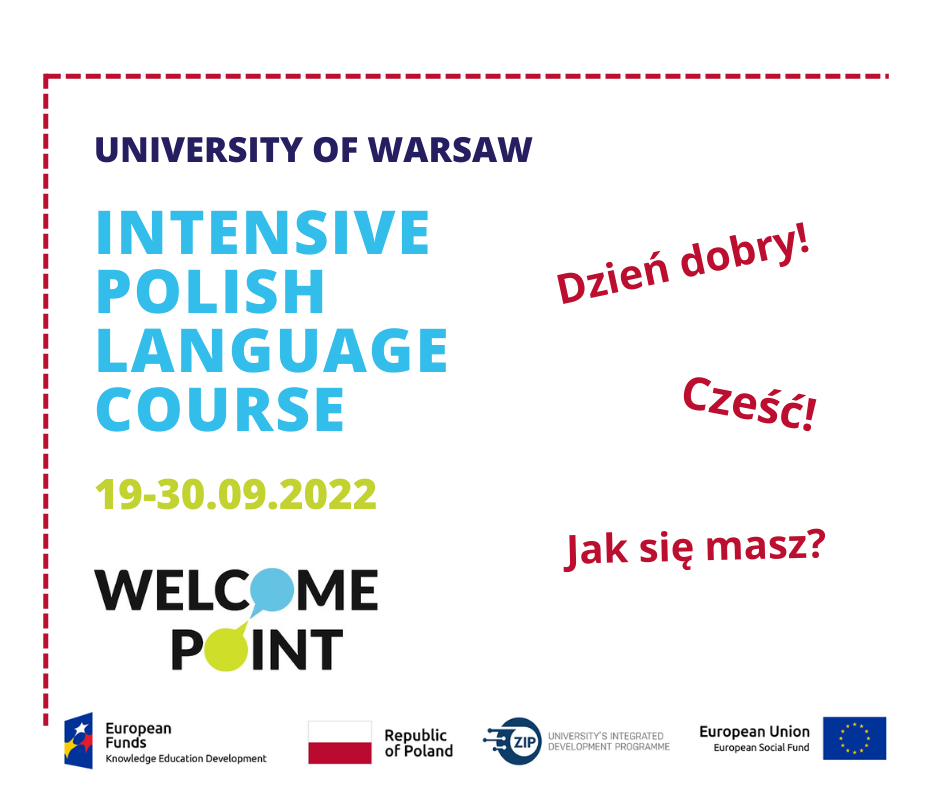 The course is aimed at preparing international students for living, learning, working and enjoying living in Poland. Participants of the course will explore at the elementary level secrets of the Polish language and acquire knowledge of Polish culture essential to reside in Poland, eg. how to buy a ticket, order a coffee or lunch, how to find your way around UW and dealing with basic affairs and phrases essential for social life in Poland. This is a unique option to meet colleagues from all over the world before the start of the classes and feel confident with Polish before coming to University. In this course, intended for students of last 4 semesters at the University of Warsaw, we offer:

WHERE: the Main Campus of the University of Warsaw, 26/28 Krakowskie Przedmieście Street.

Hurry up! The places are limited.
Registration will start on 6 th  July. To register please visit IRK page.

Introducing the procedure for the course of the diploma exam at the university centre for environmental studies and sustainable development (ucbs) effective from 25 may,2022

details in the link below:
Study Visits Programme for Ukrainian Students and Doctoral Candidates

The rules of short-term mixed practices were published on the BWZ website, which on May 16 this year have been approved by the appropriate Vice-Rector http://bwz.uw.edu.pl/praktyki-krotkoterminowe-erasmus-2021-2022-oraz-2022-2023/

Short-term short-term mixed practices are new to Erasmus +, where the physical part of the mobility can last from 5 to 30 days and, in the case of first cycle, second cycle or long cycle studies, must be combined with virtual activities.

Questions and doubts regarding short-term mixed practices should be directed to erasmusbwz@uw.edu.pl or by phone to the number 22 55 24 068.

The schedule of diploma exams for Sustainable Development 2021/2022

The Baltic Science Bridge, an initiative to support Ukrainian scholars and scientists unable to work due to the war. The initiative is being led by the BUP Associate Secretariat at the Hamburg University of Applied Sciences. The Baltic Science Bridge is meant to give Ukrainian scholars and scientists an opportunity to live and perform some academic work in a Baltic Sea country which is not part of the conflict. Read more about the initiative on the BUP website.

Germany
Philipp Schwartz Initiative for researchers at risk allows researchers who are subject to significant and continuous personal threat in their country of origin to continue their work at German universities and research institutions.

The Volkswagen Foundation wants to support Ukrainian scientists in temporarily continuing their scientific work in Germany.

The Deutsche Forschungsgemeinschaft (DFG, German Research Foundation) supports researchers who have fled their home countries by making it easier for them to join research projects and apply for funding under the Walter Benjamin Programme.

The Gerda Henkel Foundation is reaching out to past and current grant holder as regards individual scholarships for scholars who are at risk or who had been forced to flee. They can themselves get assistance or can recommend support for other persons employed at Ukrainian universities.

Polycentricity and Plurality of Premodern Christianities (POLY) at Goethe University Frankfurt offers five scholarships to Ukrainian historians who are forced to leave their country. Scholarships consist of 3000 € per month each and are initially limited to four months. They address post-doctoral scholars in medieval and early modern history with a focus on religious plurality. There is no deadline and no formal application. Read more about the scholarships.

France
PAUSE program opens a special call for emergency assistance to Ukrainian researchers in danger, through an emergency fund granted by the French Ministry of Higher Education, Research and Innovation.

Sweden
SFF offers help to Ukrainian researchers who come to Sweden in 2022. Within the call “SSF individual grants for Ukrainian scientists 2022” there is 30 million SEK is allocated and aimed towards Ukrainian citizens with a doctoral degree.

Austria
The Austrian Academy of Sciences is offering an emergency call for applications from Ukrainian researchers as part of its academic mobility programme “Joint Excellence in Science and Humanities” (JESH).

Switzerland
The SNSF is making available 1 million francs to host researchers from Ukraine at universities in Switzerland through Scholars at Risk and supporting them with a series of additional measures.

Czech Republic
The Neuron Science Endowment Fund, its patrons and IOCB Tech have teamed up to help young scientists who are currently leaving Ukraine seeking a new refuge in the Czech Republic.

United Kingdom
Cara (the Council for At-Risk Academics) helps academics at immediate risk around the world to escape to a place of safety where they can continue their work. Read more about the support they offer on their website.

More important initiatives
Science for Ukraine, a community group of volunteer students and research scientists from academic institutions in Europe and around the world. On their website you can find open positions for researchers directly affected by Russia’s invasion of Ukraine.

The Central European University (CEU) has a lot of initiatives for helping scholars. Among many initiatives all vacant rooms at the Budapest Kerepesi Dormitories have been made available to accommodate alumni and their families fleeing the war in Ukraine free of charge and they aim to expand the offer of fellowships to scholars from Ukraine. Read more about the CEU initiatives on their website.

UkraineTakeShelter.com is an independent platform connecting Ukrainian refugees with potential hosts and housing.

SGH Warsaw School of Economics
The university has, among many other important initiatives, introduced special rules related to the educational part of the academic year (e.g., waiving tuition, flexible registration for courses, flexible regulations pertaining to courses/exams requirements, etc.) and established an SGH voluntary service to support Ukrainian students and their families. If you are interested in studying at SGH Warsaw School of Economics, please send an email to: admission@sgh.waw.pl

University of Agriculture in Nitra
The university is for example offering financial support via a special scholarship. The scholarship is provided from the university’s own resources in cash in the amount of € 300 for students I. and II. degree of study in full-time form. Students will be notified of more detailed information about the dates and place of payment. Furthermore there are opportunities to complete academic mobility, work stays and postdoctoral stays at SUA in Nitra for students, employees and doctoral students of Ukrainian universities, contact address regarding this is: vladislav.valach@uniag.sk
Any request in general can be sent to: ukrajina@uniag.sk

University of Gdańsk
The Students’ Legal Clinic is preparing to provide support in informing students about obtaining a secure status in Poland. The University is in contact with NAWA regarding the admission of refugee students under scholarships for foreigners. The university have reduced fees for Ukrainian students for the current preparatory courses for Polish language certificate exams. Students from Ukraine who have come to Poland may apply for a transfer to study. See more information on the university website.

Central European University (CEU)
The CEU has a lot of initiatives for helping students. Among many initiatives they have a Student Emergency Fund, they have waived the registration fee for students from Ukraine and they are actively fundraising for scholarships for Ukrainian students through a solicitation campaign. Read more about the CEU initiatives on their website.

STAR (Student Action for Refugees)
STAR campaigns for and supports the creation of scholarships to improve access to university for people who have claimed asylum in the UK. On their website you can find a list of scholarship opportunities in the UK, together with advice for your application and information about other funding opportunities.

Science for Ukraine, a community group of volunteer students and research scientists from academic institutions in Europe and around the world. On their website you can find open positions for students directly affected by Russia’s invasion of Ukraine.

The Article 26 Backpack empowers young people to plan and structure their higher education, training and career pathways. The Backpack provides them with a way to safely store and share with universities, scholarship agencies, and even employers their educational background, employment history, professional achievements and goals.